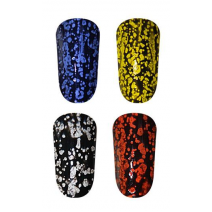 What would life be without magic? It would be very bleak and a little boring. Enchanted as we look to magicians as they disappear huge landmark cities or sawed apparently people. We are amazed about surprising card tricks and wonder at all this witchcraft: "How on earth that could that be? How does such a thing works? "We will probably never know. Something that contributes to the security of the whole stimulus. Especially female magic fans will be delighted, because even with nail polish, there is now magic! This proves to us with the alessandro Go Magic! Nail Dots effect polish.
alessandro Go Magic Nail Dots - Abra Kadabr ... alessandro?

It's true: alessandro has gone under the sorcerers and magicians. But we do not need to make us worry, our hands will not disappear of course, but just embellished! The Enchanted Go Magic! Nail polish is easily removed through the lacquered nails and within seconds appears a magical speckled pattern. Scary. Magical. Scary Magic. Without spell and other hocus-pocus, but super trendy.

Besides the magic, the look has something great in itself, namely, the trendy polka dot look. Polka Dots - as they are called - now decorate all sorts of things in everyday life, ranging from apparel, umbrellas, to wallpaper. The pattern was particularly popular in the 50s, the fashion for some time now making a comeback. We are definitely a fan of this trend and the appropriate collection and let this trend by alessandro quite easily and quickly conjure up on the nails and that in your favorite color.

You will receive a 5% discount if you subscribe to our newsletter. Stay up-to-date!